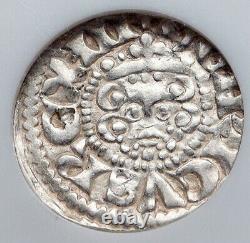 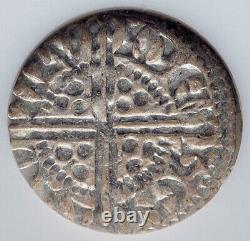 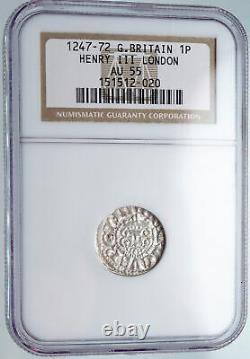 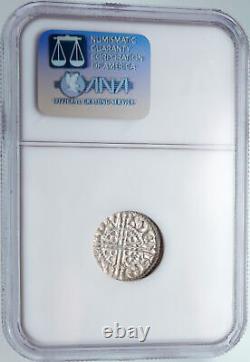 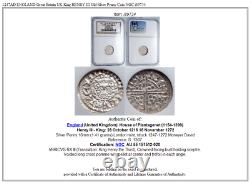 Item: i89734 Authentic Coin of. AU 55 151512-020 hNRICVS RX III (Translation: King Henry the Third), Crowned facing bust holding sceptre. Voided long cross pommée with pellet at center and trefoil in each angle. Henry III (1 October 1207 - 16 November 1272), also known as Henry of Winchester , was King of England, Lord of Ireland, and Duke of Aquitaine from 1216 until his death.

His early rule was dominated first by Hubert de Burgh and then Peter des Roches, who re-established royal authority after the war. In 1230, the King attempted to reconquer the provinces of France that had once belonged to his father, but the invasion was a debacle. A revolt led by William Marshal's son, Richard, broke out in 1232, ending in a peace settlement negotiated by the Church. Following the revolt, Henry ruled England personally, rather than governing through senior ministers.

He travelled less than previous monarchs, investing heavily in a handful of his favourite palaces and castles. He married Eleanor of Provence, with whom he had five children. Henry was known for his piety, holding lavish religious ceremonies and giving generously to charities; the King was particularly devoted to the figure of Edward the Confessor, whom he adopted as his patron saint. In a fresh attempt to reclaim his family's lands in France, he invaded Poitou in 1242, leading to the disastrous Battle of Taillebourg. After this, Henry relied on diplomacy, cultivating an alliance with Frederick II, Holy Roman Emperor.

He planned to go on crusade to the Levant, but was prevented from doing so by rebellions in Gascony. A coalition of his barons, initially probably backed by Eleanor, seized power in a coup d'état and expelled the Poitevins from England, reforming the royal government through a process called the Provisions of Oxford. Henry and the baronial government enacted a peace with France in 1259, under which Henry gave up his rights to his other lands in France in return for King Louis IX recognising him as the rightful ruler of Gascony. The baronial regime collapsed but Henry was unable to reform a stable government and instability across England continued.

In 1263, one of the more radical barons, Simon de Montfort, seized power, resulting in the Second Barons' War. Henry persuaded Louis to support his cause and mobilised an army. The Battle of Lewes occurred in 1264, where Henry was defeated and taken prisoner. Henry's eldest son, Edward, escaped from captivity to defeat de Montfort at the Battle of Evesham the following year and freed his father.

Henry initially enacted a harsh revenge on the remaining rebels, but was persuaded by the Church to mollify his policies through the Dictum of Kenilworth. Reconstruction was slow and Henry had to acquiesce to various measures, including further suppression of the Jews, to maintain baronial and popular support. Henry died in 1272, leaving Edward as his successor. He was buried in Westminster Abbey, which he had rebuilt in the second half of his reign, and was moved to his current tomb in 1290. Some miracles were declared after his death; however, he was not canonised. Great Britain , also known as Britain , is an island in the North Atlantic off the north-west coast of continental Europe. With an area of 209,331 km. (80,823 sq mi), it is the largest island in Europe and the ninth-largest in the world.

In 2011 the island had a population of about 61 million people, making it the third-most populous island in the world, after Java in Indonesia and Honshu in Japan. The island is the largest in the British Isles archipelago, which also includes the island of Ireland to its west and over 1,000 smaller surrounding islands.

The island is dominated by an oceanic climate with quite narrow temperature differences between seasons. Politically, the island is part of the United Kingdom of Great Britain and Northern Ireland, constituting most of its territory: most of England, Scotland, and Wales are on the island, with their respective capital cities, London, Edinburgh, and Cardiff. The term Great Britain often extends to include surrounding islands that form part of England, Scotland, and Wales. A single Kingdom of Great Britain resulted from the Union of Scotland and England (which already comprised the present-day countries of England and Wales) in 1707. More than a hundred years before, in 1603, King James VI, King of Scots, had inherited the throne of England, but it was not until 1707 that the Parliaments of the two countries agreed to form a unified state.

In 1801, Great Britain united with the neighboring Kingdom of Ireland, forming the United Kingdom of Great Britain and Ireland, which was renamed the United Kingdom of Great Britain and Northern Ireland after the Irish Free State seceded in 1922. World-renowned expert numismatist, enthusiast, author and dealer in authentic ancient Greek, ancient Roman, ancient Byzantine, world coins & more. Ilya Zlobin is an independent individual who has a passion for coin collecting, research and understanding the importance of the historical context and significance all coins and objects represent. Send me a message about this and I can update your invoice should you want this method.

Getting your order to you, quickly and securely is a top priority and is taken seriously here. Great care is taken in packaging and mailing every item securely and quickly. What is a certificate of authenticity and what guarantees do you give that the item is authentic? You will be very happy with what you get with the COA; a professional presentation of the coin, with all of the relevant information and a picture of the coin you saw in the listing. Additionally, the coin is inside it's own protective coin flip (holder), with a 2x2 inch description of the coin matching the individual number on the COA. Whether your goal is to collect or give the item as a gift, coins presented like this could be more prized and valued higher than items that were not given such care and attention to. When should I leave feedback? Please don't leave any negative feedbacks, as it happens sometimes that people rush to leave feedback before letting sufficient time for their order to arrive. The matter of fact is that any issues can be resolved, as reputation is most important to me.

My goal is to provide superior products and quality of service. How and where do I learn more about collecting ancient coins? Visit the Guide on How to Use My Store. For on an overview about using my store, with additional information and links to all other parts of my store which may include educational information on topics you are looking for. The item "1247AD ENGLAND Great Britain UK King HENRY III Old Silver Penny Coin NGC i89734" is in sale since Tuesday, March 30, 2021.

This item is in the category "Coins & Paper Money\Coins\ World\Europe\UK (Great Britain)\Penny". The seller is "highrating_lowprice" and is located in Rego Park, New York. This item can be shipped worldwide.