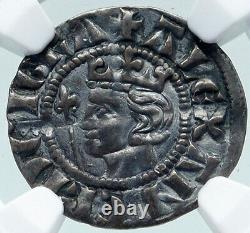 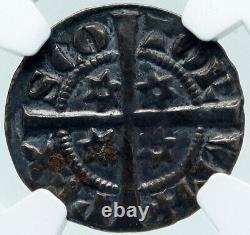 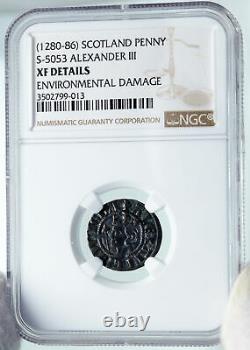 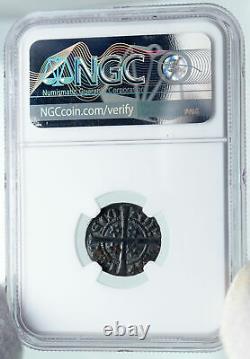 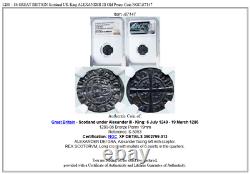 XF DETAILS 3502799-013 ALEXANDER DEI GRA, Alexander facing left with scepter. REX SCOTORVM, Long cross with mullets of 6 points in the quarters. Alexander III (Medieval Gaelic: Alaxandair mac Alaxandair ; Modern Gaelic: Alasdair mac Alasdair) (4 September 1241 - 19 March 1286) was King of Scots from 1249 until his death. He concluded the Treaty of Perth, by which Scotland acquired sovereignty over the Western Isles and the Isle of Man. His heir, Margaret, Maid of Norway, died before she could be crowned.

On attaining his majority at the age of 21 in 1262, Alexander declared his intention of resuming the projects on the Western Isles which the death of his father thirteen years before had cut short. He laid a formal claim before the Norwegian king Haakon. Haakon rejected the claim, and in the following year responded with a formidable invasion.

Sailing around the west coast of Scotland he halted off the Isle of Arran, and negotiations commenced. Alexander artfully prolonged the talks until the autumn storms should begin.

At length Haakon, weary of delay, attacked, only to encounter a terrific storm which greatly damaged his ships. The Battle of Largs (October 1263) proved indecisive, but even so, Haakon's position was hopeless. Baffled, he turned homewards, but died in Orkney on 15 December 1263.

Norway retained Orkney and Shetland until 1469 when they became a dowry for James III's bride, Margaret of Denmark. Alexander III has been depicted in historical novels.

The Thirsty Sword (1892) by Robert Leighton. It includes depictions of Alexander III and his opponent Haakon IV of Norway. Alexander the Glorious (1965) by Jane Oliver. The Crown in Darkness (1988) by Paul C.

A crime fiction novel where Hugh Corbett investigates the "mysterious death" of Alexander III (1286). Alexander supposedly suffered a fatal fall from his horse. But there are suspicions of murder. The novel concludes that Alexander was indeed murdered "by a fanatical servant" of Edward I of England.

The killer acting according to "Edward's secret desire to overwhelm and control Scotland". Doherty suggests that the personal relations of the two kings were strained by constant arguments, though this is not confirmed by historical sources. Quest For A Maid (1988) by Frances Mary Hendry. The novel depicts the life of Meg, her power-hungry older sister Inge, Lady Marjorie, Countess of Carrick and their part in securing the succession of Lady Marjorie's son Robert the Bruce to the Scottish throne.

It includes depictions of Alexander III's death as "falling off a cliff" with sorcery as the cause. Insurrection (2010) by Robyn Young. This novel is the first of a series of novels primarily about the life and times of Robert the Bruce. However, it covers Alexander III and the circumstances surrounding his death in some detail. Raphael Holinshed, in his oft-fanciful history of England in his Chronicles , stated that at Alexander III's wedding, a horrible monster, mostly skeleton but with raw flesh, appeared at the end of the procession and caused the wedding to be hurriedly concluded.

This was, in tradition, an omen of death. Crusader (1991) by Nigel Tranter.

This novel follows the minority of Alexander III and his relationship with David de Lindsay. Tranter, who has written scores of historical novels spanning the range of Scotland's history, also wrote "Envoy Extraordinary" (1999) (about Patrick Earl of Dunbar) and "True Thomas" (1981) (about Thomas the Rhymer), both of which take place during the reign of Alexander III, and in which Alexander is a featured character. Scotland is a country that is part of the United Kingdom. Covering the northern third of the island of Great Britain, mainland Scotland has a 96 mile (154 km) border with England to the southeast and is otherwise surrounded by the Atlantic Ocean to the north and west, the North Sea to the northeast and the Irish Sea to the south. In addition, Scotland includes more than 790 islands; principally within the Northern Isles and the Hebrides archipelagos. The Kingdom of Scotland emerged as an independent sovereign state in the European Early Middle Ages and continued to exist until 1707. By inheritance in 1603, James VI of Scotland became king of England and Ireland, thus forming a personal union of the three kingdoms.

The legal system within Scotland has also remained separate from those of England and Wales and Northern Ireland; Scotland constitutes a distinct jurisdiction in both public and private law. The continued existence of legal, educational, religious and other institutions distinct from those in the remainder of the UK have all contributed to the continuation of Scottish culture and national identity since the 1707 incorporating union with England. In 1999, a Scottish Parliament was re-established, in the form of a devolved unicameral legislature comprising 129 members, having authority over many areas of domestic policy. The head of the Scottish Government is the first minister of Scotland, who is supported by the deputy first minister of Scotland. Scotland is represented in the United Kingdom Parliament by 59 MPs.

Scotland is also a member of the British-Irish Council, sending five members of the Scottish Parliament to the British-Irish Parliamentary Assembly. Scotland is divided into 32 administrative subdivisions or local authorities, known as council areas. Glasgow City is the largest council area in terms of population, with Highland being the largest in terms of area. Limited self-governing power, covering matters such as education, social services and roads and transportation, is devolved from the Scottish Government to each subdivision. Great Britain , also known as Britain , is an island in the North Atlantic off the north-west coast of continental Europe. With an area of 209,331 km.

(80,823 sq mi), it is the largest island in Europe and the ninth-largest in the world. In 2011 the island had a population of about 61 million people, making it the third-most populous island in the world, after Java in Indonesia and Honshu in Japan. The island is the largest in the British Isles archipelago, which also includes the island of Ireland to its west and over 1,000 smaller surrounding islands.

The island is dominated by an oceanic climate with quite narrow temperature differences between seasons. Politically, the island is part of the United Kingdom of Great Britain and Northern Ireland, constituting most of its territory: most of England, Scotland, and Wales are on the island, with their respective capital cities, London, Edinburgh, and Cardiff.

The term Great Britain often extends to include surrounding islands that form part of England, Scotland, and Wales. A single Kingdom of Great Britain resulted from the Union of Scotland and England (which already comprised the present-day countries of England and Wales) in 1707. More than a hundred years before, in 1603, King James VI, King of Scots, had inherited the throne of England, but it was not until 1707 that the Parliaments of the two countries agreed to form a unified state.

Great care is taken in packaging and mailing every item securely and quickly. What is a certificate of authenticity and what guarantees do you give that the item is authentic?

You will be very happy with what you get with the COA; a professional presentation of the coin, with all of the relevant information and a picture of the coin you saw in the listing. Additionally, the coin is inside it's own protective coin flip (holder), with a 2x2 inch description of the coin matching the individual number on the COA. Whether your goal is to collect or give the item as a gift, coins presented like this could be more prized and valued higher than items that were not given such care and attention to. When should I leave feedback?

Please don't leave any negative feedbacks, as it happens sometimes that people rush to leave feedback before letting sufficient time for their order to arrive. The matter of fact is that any issues can be resolved, as reputation is most important to me. My goal is to provide superior products and quality of service. How and where do I learn more about collecting ancient coins?

Visit the Guide on How to Use My Store. For on an overview about using my store, with additional information and links to all other parts of my store which may include educational information on topics you are looking for. The item "1280 86 GREAT BRITAIN Scotland UK King ALEXANDER III Old Penny Coin NGC i87147" is in sale since Friday, November 13, 2020.