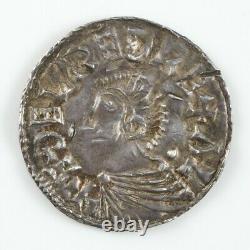 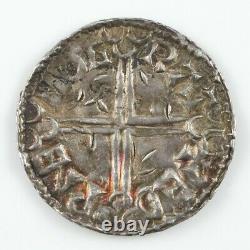 Voided long cross, each arm terminating in a crescent, +EDPNE M'O GRAT. Spink 1151, North 774, SCBI Cop 377 & SCBI Fitzwilliam 680, same dies. J Martin 1986, prior to that, Elmore Jones, 1971. Aethelred came to the throne of England in 978, at the age of twelve, after the assassination of his older brother Edward (the Martyr) the assassins were supporters of Aethelred, but it is unlikely that Aethelred himself had anything to do with the conspiracy.

His name in Old English means: Aethel= noble and red= council or advice, so it is rather ironic that his nickname became'the Unready' =ill advised. However, the first record of this nickname doesn't appear until 150 years after his death in 1016 and it is very unlikely that his contemporaries thought of him in this light. Peckmarks are a lovely link to the past, they are marks made by a Viking to test the silver content. This varies with the age of coin and there are grades between. As struck with no traces of wear. Very slight traces of wear, all parts of legend etc present, visible and clear.

I have been involved in the antiques business since 1971. My career took a leap forward when I joined Bonhams in 1976. Some five years later I became head of the Decorative Arts department. The item "Aethelred II Silver Long Cross Penny, Cambridge, Eadwine 978-1016" is in sale since Friday, November 12, 2021. This item is in the category "Coins\Coins\British\Hammered (Pre-c.

The seller is "eric-knowles-the-hoard" and is located in High Wycombe. This item can be shipped worldwide.600 - 1066)