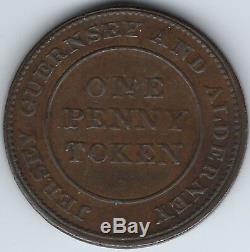 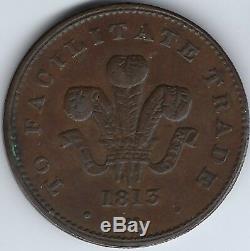 GREAT BRITAIN Jersey Guernsey & Alderney 1813 Penny Token Withers 2044a (RR) Medal Alignment Inv 3857. Very pleased to be offering a nice selection of British 19th Century tokens. They are primarily from the collection of a very discriminating collector who painstakingly formed this collection over a period of many years. It includes a nice array of better grade common pieces right up to some exceptionally rare pieces.

Catalogue numbers refer to Paul and Bente Withers book, British Copper Tokens 1811 1820 , published by Galata Press in 1999. The book is well researched with excellent photos, and realistic rarity ratings, and has done much to revive interest in the series. Unlike many of the Conder / Provincial tokens of the late 1700s that were made for collectors, this series was meant to circulate. They are from the time of the Industrial Revolution, and many of the pieces pertain to the mining industry, others to merchants, and some to the workhouses. There is something for everybody in the series, popular themes such as Wellington, and many pieces that will prove challenging to obtain.

While many of the rarities are truly rare, that does not necessarily translate into expensive. This piece offers an interesting design and is in an excellent state of preservation in a series noted for its uninteresting, utilitarian designs that are usually found in lower grades.

North American standards (Please note grading is subjective, and the best determination of grade would be a close examination of the scans). Rarity Ratings (according to Withers). RRR Extremely rare, Very few specimens seen, or most known are in captivity. RR- Very rare, Few specimens available. R Rare, You will find it difficult to locate one of these.

S Scarce, Difficult to find. N Normal, Not difficult to locate. C Common, One in more than half the collections we saw.

VC Very common, One, or more in almost every collection we examined. It is interesting to note that some of the British pieces ended up circulating in Canada, and while the piece may be listed as a Rarity in the United Kingdom, in some cases it is considered a common piece in Canada. (Business # is 82778 1261 RT0001). The item "GREAT BRITAIN Jersey Guernsey & Alderney 1813 Penny Token Withers 2044a Inv 3857" is in sale since Tuesday, November 6, 2018. This item is in the category "Coins & Paper Money\Coins\ World\Europe\UK (Great Britain)\Penny". The seller is "britannianumismatics" and is located in Moncton, New Brunswick. This item can be shipped to Canada, all countries in Europe, United States, Australia.