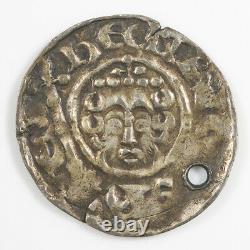 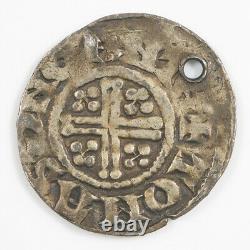 Voided short cross with quatrefoil of pellets in each angle, within beaded circle, legend around +TOMAS ON CANTE. From the Eccles Collection of English Coins via Spink. Considered class 7b with flat-topped'A'.

From the coins of Henry II, through those of Richard and John, the coinage style had changed little but the quality had deteriorated. With the first (yes, first) coronation of Henry III in 1216 at the age of just 9, Henry succeeded his father, John, during times of strife and this maybe why the coinage was not re-vamped for the next 30 years. The pope at the time, effectively Henry's superior, deemed the first coronation that had carried out in a rush (to stop Louis of France from taking the English throne) at Gloucester Cathedral, as not properly carried out - he even had to borrow robes and have them cut down to size and use his mother's headdress as a crown!

The second coronation was re-enacted in 1220, properly this time. Later, in 1225 baronial unrest was quelled, when, unlike his father he willingly sealed and signed the Magna Carta (in fact three times) and it became enshrined in English law. He ruled for 56 years, so this very often overlooked English monarch, must have done something right to last that long! This varies with the age of coin and there are grades in between.

I have been involved in the antiques business since 1971. My career took a leap forward when I joined Bonhams in 1976. Some five years later I became head of the Decorative Arts department. The item "Henry III Voided Short Cross Silver Penny, Canterbury Mint, Tomas Moneyer, 1223" is in sale since Wednesday, June 2, 2021. This item is in the category "Coins\Coins\British\Hammered (Pre-c. The seller is "eric-knowles-the-hoard" and is located in High Wycombe. This item can be shipped worldwide.