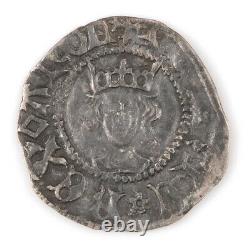 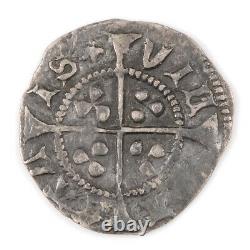 Reign of Henry VI, Lancastrian. Fine, good portrait, areas of weakness. Crowned facing bust, HENRIC REX ANGL, rosettes and mascles as stops. Long cross, three pellets in each quarter, VILLA CALIS. Henry reigned twice as king of England, from 1422 to 1461 and then again 1470 to 71. He inherited the long running'Hundred Years War' where the rights to the French throne were contested, but he was also a pawn in the battle between the Lancastrians and Yorkists for the throne. He is the only English monarch to be crowned the king of France too, as Henry II, in 1431. He was rather an ineffectual king and by 1453 had lost all French territories except Calais. Suffering constantly with mental health issues, he died in 1471. This varies with the age of coin and there are grades in between. As struck with no traces of wear. Very slight traces of wear, all parts of legend etc present, visible and clear. Some signs of wear on the higher parts of the relief, all parts of legend etc present, but maybe worn. Wear on the coin and parts of legend etc may be missing or not visible.

I have been involved in the antiques business since 1971. My career took a leap forward when I joined Bonhams in 1976. Some five years later I became head of the Decorative Arts department. The item "Henry VI Silver Half Penny Calais Mint Rosette-Mascle 1430-31" is in sale since Wednesday, October 21, 2020.