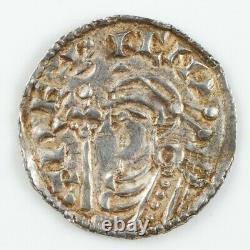 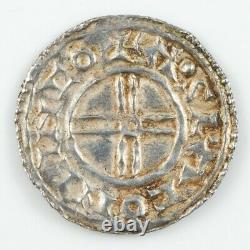 Short voided cross, united in the centre with an annulet, outer circle surrounded by the legend, +A. Spink 1159, North 790, SCBI Copenhagen 1568.

Ex DNW, previously private dealer, prior to that J. Cnut was born around 990, his father was Sweyn Forkbeard, the Danish. Little is known of his childhood and indeed the name of his mother. In a later Saga he is described as'exceptionally tall and strong and the handsomest of men, all except for his nose which is rather hooked'.

In 1013 he invades England with his father, the climax to a number of Viking raids. Aethelred, the English king, flees the country to France and Forkbeard usurps the throne. However, Forkbeard died soon after and Cnut's elder brother Harald Bluetooth becomes King of Denmark.

Cnut is elected King of England. Quite naturally some o the English nobility disagree with this and there is a period of unrest. Once ensconced upon the throne he reigns for almost two decades. This varies with the age of coin and there are grades between.

The item "KIng Cnut, Silver Short Cross Type Penny, Lincoln, Aslakr, 1016-35" is in sale since Monday, November 15, 2021. This item is in the category "Coins\Coins\British\Hammered (Pre-c.