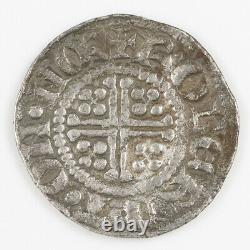 Voided short cross within beaded circle, legend around +ROBERD. No English coins were made in the name of John, only Irish coins bear.

A mere paragraph can not do justice to this larger than life king of England, his coinage doesn't reflect this either. He came to the throne in 1199 after the death of his brother, Richard (the Lionheart). As a young man, he already had a reputation for treachery.

For example, whilst Richard was away at the Crusades, John attempted to overthrow the appointed regent, presumably to take the throne, but failed. Then, whilst Richard was returning home and he was kidnapped, he offered to pay the kidnappers to keep him imprisoned and away from England for as long as possible! He was only released when his mother pawned the crown jewels to pay the ransom! In his defence, modern historians have removed the layers of hatred bestowed on him and see him to have been hard working and an able administrator and general, albeit with psychopathic tendencies. This varies with the age of coin and there are grades inbetween. As struck with no traces of wear. Very slight traces of wear, all parts of legend etc present, visible and clear.

The item "King John Voided Short Cross Silver Penny, Northampton, Roberd T 1199-1216" is in sale since Thursday, July 8, 2021. This item is in the category "Coins\Coins\British\Hammered (Pre-c. The seller is "eric-knowles-the-hoard" and is located in High Wycombe. This item can be shipped worldwide.