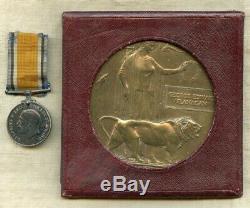 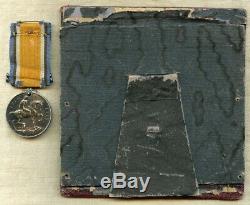 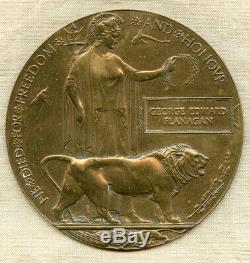 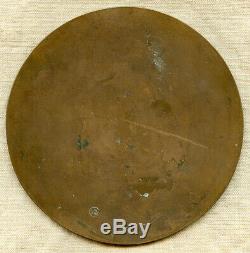 ARTIFACT: This is a Named World War I United Kingdom KIA, or Killed in Action, "Death Penny" Grouping. The Memorial Plaque was issued after the First World War to the next-of-kin of all British and Empire service personnel who were killed as a result of the war. The plaques (which could be described as large plaquettes) about 4.75 inches (120 mm) in diameter, were cast in bronze, and came to be known as the "Dead Man's Penny", because of the similarity in appearance to the much smaller penny coin which itself had a diameter of only 1.215 inches (30.9 mm). 1,355,000 plaques were issued, which used a total of 450 tons of bronze, and continued to be issued into the 1930s to commemorate people who died as a consequence of the war. Bronze medal was awarded to those who were either Members of the Territorial Force or Territorial Force Nursing Service on 4 August 1914 or members with four years or more service prior to 4 August 1914 and who rejoined by 30 September 1914.

SIZE: Approximately Bronze Medal with Frame 5-7/8" each side Medal: 1-3/8" diameter Ribbon:riboon to medal 2" x 1-1/4". ATTACHMENT: Horizontal "safety" type pin. ITEM NOTES: This is from a British Militaria collection which we will be listing more of over the next few months. CONDITION: 8+ (Excellent): This plaques aer minor wear, medal has amazing patina and fraying and aged on the ribbon, overall excellent condition. GUARANTEE: As with all my artifacts, this piece is guaranteed to be original, as described.

The item "Named WWI UK KIA Death Penny Grouping" is in sale since Saturday, March 21, 2020. This item is in the category "Collectibles\Militaria\WW I (1914-18)\Original Period Items\Great Britain\Medals, Pins & Ribbons".

The seller is "flyingtigerantiques" and is located in Portsmouth, New Hampshire. This item can be shipped to North, South, or Latin America, all countries in Europe, all countries in continental Asia, Australia.